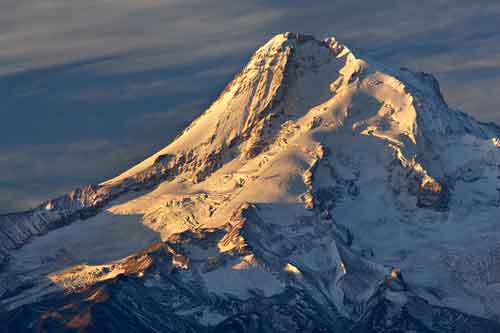 Oregon's Mount Hood is climbed by more people each year in the United States than any other mountain. The mountain sparkles with grandeur, from its deep fir forests and powerful rivers to its vast glaciers and thundering waterfalls. At an elevation of 11,239 feet, Mount Hood's summit stands alone as the most prominent geographic feature in the region, its scale amplified by its solitude. Hood can be seen from nearby Portland and from locations up to 100 miles away. Hood stands large in the minds and imaginations of climbers, too, offering a variety of technical challenges and diverse ecosystems characterized by breathtaking beauty. 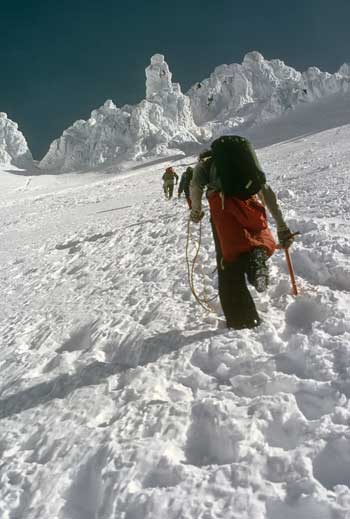 Today, six main routes and 30 variations can be taken to reach the summit. Exploration on Mount Hood has spanned three centuries, with each new guard of climbers contributing to the mountain's story. While the gear we use has changed over the decades, the spirit of adventure has not. Mountaineers continue to explore and test their limits on Mt. Hood, adopting an ethic of reverence and awe for the mountain and a dogged persistence to reach the summit common amongst us all. The trials and tales of the earliest explorers and climbers are not unlike our own.

In the 1800's Mount Hood's earliest explorers set into the unknown, unsure whether their goals were attainable. While distinctly more known today, the mountain is no less wild -- an attempt at Hood's summit today requires the same cocktail of curiosity, ambition, and courage. The bravery and creative vision of Mt. Hood's trailblazers – from a barefoot Joel Palmer in 1845, to the first female climbers in 1867, to the first group to ascend and descend on skis in 1931, to modern-day climbers establishing new, difficult test pieces – lend courage to all who follow.

The Mt. Hood pen is a symbol of the mountain's rich climbing history, commemorating the accomplishments of alpinists spanning three centuries. Choosing risk, challenge, danger, and adversity, climbers on Mt. Hood test their strength and character. From these experiences we gain confidence, humility, and wisdom. The Mt. Hood pen celebrates the beauty of the mountain and our collective struggles and accomplishments as alpinists.

Mt. Hood is the fourth largest of the great volcanoes of the Cascade Range stretching along the country's west coast. Multiple legends describe the origin of the Multnomah name for Hood, Wy-east. In one tale, Mount Hood and its neighbors, Mt. St. Helens and Mt. Adams, are the only remnants of feuding lovers who were frozen as punishment by the Great Spirit. While no one is certain, historians say it is unlikely that American Indians living in the area had summited Mount Hood prior to the arrival of white explorers. Tribes in the region, including the Multnomah and the Klickitat, revered and lived in fear of the mountain. 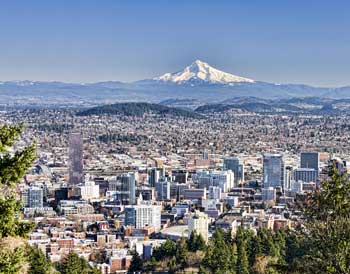 Mt. Hood's geologic history stretches back 700,000 years, making it one of the oldest mountains in the Cascade Range. Hood is a stratovolcano, meaning it is comprised of alternating layers of lava and ash. The mountain as we know it today formed and evolved over a span of geologic time, undergoing a series of eruptions and the formation and melting of numerous ice caps. Notable geologic features such as the Steel Cliff, the Hood River Valley, and Crater Rock were forged out of the cyclical process of fire and ice. In relative terms, compared to its neighbor Mt. St. Helens, Mt. Hood's volcanic activity has gentle in nature, preserving its perfect cone shape. Today, Mt. Hood is considered dormant, though seismic activity is constantly monitored.

The majority of Mt. Hood is below tree line; its forests are comprised of massive old Douglas fir, hemlock and cedar with a dense understory of rhododendron. Five major rivers contribute to the forceful Columbia below. Tremendous waterfalls and dramatic canyons abound. Huge glaciers and snowfields with gaping crevasses occupy the higher elevations. Surrounded by diversity and the forces of nature, humans are dwarfed by the grandeur and beauty of Mt. Hood.

Mount Hood was first officially summited on August 6, 1857 by Henry J. Pittock and four companions. However, the upper reaches of the mountain were explored in the preceding decade by important trailblazing teams led by Joel Palmer in 1845 and Thomas Jefferson Dryer in 1854. While these teams fell short of reaching the summit, the earliest explorers of Mt. Hood made the task seem possible for those who would follow.

Joel Palmer explored the upper regions of Mt. Hood somewhat by accident in 1845 when he sought passage for a wagon train hung up by delays crossing the Columbia River at The Dalles. Traveling on foot, Palmer forged a path through dense rhododendron forest, made his way along the White River and through canyons, ascended a cliff of snow and ice, and climbed over boulder and rocks. It was after all of this that he found himself barefoot above 9,500 feet when his moccasins finally fell apart. Though Palmer turned back shy of the summit, his exploration brought Hood into the realm of possibility. Palmer correctly predicted that the south side of the mountain would afford the easiest summit route; today the south side is climbed more often than any other. 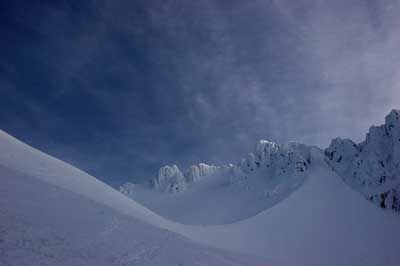 In 1854, a sizeable group led by Thomas Jefferson Dryer (founder of the Weekly Oregonian) set out to reach the summit. While most of the team turned back early, Dryer and a couple of companions claimed to have reached the summit, which they estimated at a lofty 18,300.

Three years later, a team led by Henry J. Pittock repeated the summit attempt. In a full report published in the Democractic Standard the next week, one climber, James Deardorff, challenged Dryer's first ascent claim. Whereas Dryer had described seeing vents of steaming, sulfurous gas at the summit, Deardorff said the vents were about 350 feet before the summit, on the ridge at the top of Steel Cliff. The passage of time and repeated ascents supported Deardorff's assertion, giving Pittock's party the official first ascent on August 6, 1857. 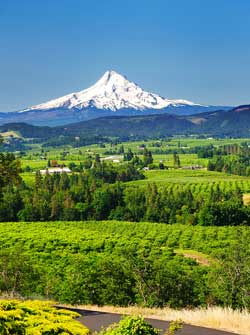 Notable milestones in early climbing history on Mt. Hood since that time include the first women to summit in 1867, the formation of the Mazama mountaineering group in 1894 when more than 100 people summited together, and the establishment of new routes including Cathedral Ridge on the Northeast face, Wy'east on the east side, and Cooper Spur and Sunshine on the north side by the turn of the twentieth century. A fire lookout cabin was maintained on the summit from 1915 – 1933, during which time park rangers rigged fixed lines to aid climbers on the upper portions of some routes. By the end of the 1930s, just before the war put a temporary hold on American mountaineering, most of the major routes on Hood had been established.

Mt. Hood is equally known for its skiing, a tradition on the mountain almost as old as climbing. Skiing was documented on Mt. Hood as early as 1890 when the legendary Langille brothers, Mt. Hood guides, skied to the Cloud Cap Inn. The first ski area was established in 1927, and the first round-trip ski mountaineering ascent/descent was completed in 1931. The Mount Hood Ski Patrol formed in 1937. More recently, Hood is known as an early incubator for snowboarding.

Today, hundreds of thousands of skiers and snowboarders ski at the resorts and make ski-mountaineering ascents and descents each year. The mountain boasts six ski areas and the only year-round lift skiing in North America, thanks to annual snowfall of nearly 500 inches. Summer training camps provide competitors with year-round opportunities not found elsewhere in the lower 48 states.

Skiers, climbers, fishermen and hikers alike gravitate to the impressive Timberline Lodge. Situated at 6,000 feet of elevation on the mountain's southern flanks, Timberline Lodge offers rustic Oregon charm and a wealth of alpine history. Many climbers start and end their journey at Timberline. 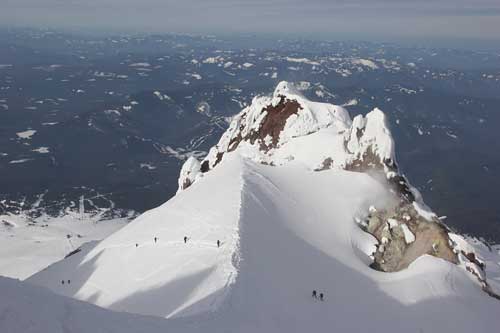 Today, climbing routes on Mt. Hood accommodate a wide range of climbers. With grades ranging from moderate Class 2 climbs to 5.9 alpine test pieces, even the easiest routes on Hood are technical. Objective dangers include crevasses, storms, avalanches, and rock fall. Seasonal ice and snow lines, such as the Black Spider, Center Drip established in 2010 by Wayne Wallace and Beau Carrillo, represent the highest technical challenge on the mountain to date.

Today we know Hood as the tallest point in Oregon and the second-most climbed mountain in the world. Standing beneath the mountain or anywhere within 100 miles, Mt. Hood looms disconcertingly large. Its constant presence and its mystery draw us, at all odds, to stand upon its summit. 10,000 climbers attempt Mt. Hood each year, and whether they reach the summit or not, these climbers become a part of the mountain's lore. To watch a sunrise from high on the mountain's upper flanks, to learn true trust crossing over gaping blue crevasses in a rope team, to climb among the cliffs and boulders left from the mountain's 700,000 year volcanic history, is to be humbled and inspired. 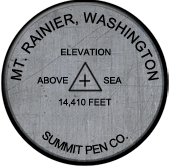 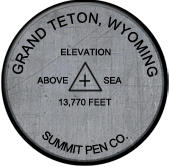 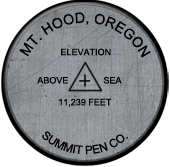